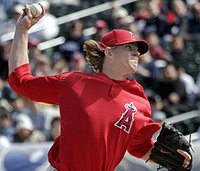 Angels pitcher Jered Weaver experienced some tightness in his throwing shoulder and the Angels are going to shelf him for the next couple of weeks. Although this comes as a surprise to some of the Angels staff, Weaver says this feeling has come up before. "The way I throw, it's going to be an issue — I've had it since high school," he said. "It sticks around for a long time, and it's a matter of knocking it out. With my long mechanics and different arm slot, I put a little more stress on my shoulder." In his rookie season, Weaver was 11-2 with a 2.56 ERA and 105 K. The Angels also held Kelvim Escobar and Francisco Rodriguez out of fielding drills because Escobar felt tightness in his left knee and Rodriguez had a sore hamstring.