Astros Close in on Trachsel?

Share All sharing options for: Astros Close in on Trachsel? 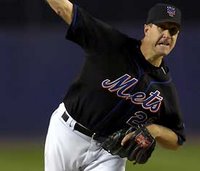 According to Sports Radio 610 in Houston, the Astros are in the final stages of a one year deal with free agent pitcher Steve Trachsel. Trachsel's agents, the Levinson brothers, met with Astros GM Tim Purpura on Febuary 7th, and according to a source close to negotiations, the meeting went well. Trachsel was 15-8 with a 4.97 ERA and 79 K with the Mets last season. Trachsel had his break out year with the Cubs in 1998, going 15-8 with a 4.46 ERA. Since 1993, Trachsel has gone 134-143 with a 4.28 ERA with the Cubs, Blue Jays, Devil Rays, and Mets. When the deal is reached, Trachsel will be the fifth starter behind Oswalt, Jennings, Williams, and Rodriguez.

UPDATE: AFTER THE NEWS OF KRIS BENSON HIT THE BASEBALL WORLD YESTERDAY, THE ORIOLES SCRAMBLED TO FIND A REPLACEMENT AND CONTACTED STEVE TRACHSEL. HIS AGENTS HAVE TALKED WITH THE ORIOLES FRONT OFFICE, AND THE "DEAL" WITH THE ASTROS IS NOW ON HOLD.