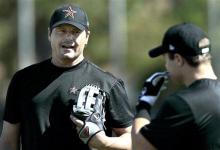 The Cardinals reportedly have joined the horse race for free agent pitcher Roger Clemens, who is already being pursued by the Yankees, Red Sox, and Astros. He is currently in Astros camp pitching to the minor league players, but hasn't ruled out a return to any team. The Cardinals, who are very short on pitching and still have money to spend, could afford Clemens for one year, if he is willing to accept something less than eighteen to nineteen million. General manager Walt Jocketty met with agent Alan Hendricks at length Monday; however, Jocketty had someone pessimistic views of the meeting. "I guess you would always have interest in a guy like that," he said. "He's someone we've expressed interest in before. I'm not sure it would be mutual, though. There are so many factors involved it would be pretty tough to do any deal with them. You never know." Hendricks also represents Cardinals Kip Wells and Braden Looper.