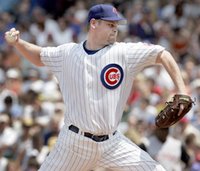 The Cubs have struggled to keep their players, especially pitchers, from being injured and that was proven today when the Cubs announced Kerry Wood would be sidelined for a week with a bruised rib cage. Supposedly, he fell getting out of his hot tub Monday night. "I'm just getting ready for Spring Training, feeling good," Wood said. "I [got out of the tub] and landed on my stomach and my chest and didn't feel too good. It's that time of year for me." Wood is hoping to remain off the DL this season and pitch mostly from the bullpen. The good news coming from Cubs camp is Mark Prior and Wade Miller have not been sidelined by injuries, and threw off the mound successfully. Furthermore, Carlos Zambrano cleared up his controversial words from Monday and said his first choice is to stay with the Cubs, and he would accept a five year deal. "My agent was talking to me, and he said the Cubs offered such an amount, and that's the first step of negotiations," Zambrano said Thursday. "Before, I think it was Tuesday or Monday and they hadn't offered anything. They were quiet." A reporter asked Zambrano something along lines of:[You would think that someone of your caliber would test the free agent market-] "No," 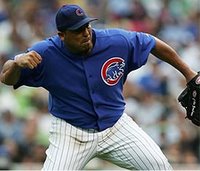 replied Zambrano. "Something around what San Francisco gave Zito, I think, is a fair deal for me. I don't say more, I don't say too [much] less, but close to what is in the market right now. Somebody opened the door and I don't want to shut it down. I don't want to close the door." Zambrano also cleared up what he said about the Cubs having one chance to sign him: "I didn't say that if they don't sign me before the end of Spring Training that I will not sign with the Cubs. They have until the beginning of the season, because I don't want to talk about the contract during the season. But for now, Zambrano wants to focus on baseball. "I just want to play baseball, I just want to pitch."

Barry Bonds and the Giants have finalized their one year, 15.8 million dollar deal. Bonds batted .270 with 26 homers and 77 RBIs.