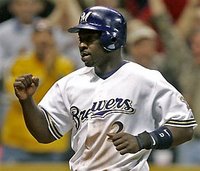 The Brewers and Bill Hall have agreed to a four year deal, worth 24 million dollars. The Brewers might have made an excellent deal. Hall has proved he can hit 30 plus home runs, with an average around .270. Although his numbers will probably drop, the Brewers can at least expect 25-30 home runs every year. With players like Dave Roberts and Juan Pierre getting 9-10 million a year, this will go down as one of the best position player signings this off season. Hall, who will make 3.5 next year, then 4.8, 6.8, and 8.4 the remaining three years, batted .270 with 35 HR and 85 RBI.