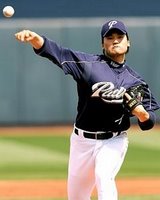 The Mets are closing in on a deal with free agent pitcher Chan Ho Park for one year, worth 600 K. Park was 7-7 with a 4.81 ERA and will compete for the fourth or fifth spot in the starting rotation. Park received a five year deal, worth 65 million dollars in 2001, but was injured throughout most of the years and was later traded to the Padres. He has a career record of 113-87.