Prior Ready; Barrett Keeping the Faith

Share All sharing options for: Prior Ready; Barrett Keeping the Faith

Word coming from Cubs Camp yesterday was the Cubs weren't going to rush once pitching phenoms Kerry Wood and Mark Prior, but today, Lou Piniella announced Mark Prior will start the fifth game of Spring Training against the Mariners. "I told him we wanted to give him a little more time," Piniella said of the conversation Monday. "We wanted to make sure that in his mind he was perfectly set to go. Unless there's a setback, and we don't anticipate any at all, he'll be ready to go in Game 5." Prior, who pitched to hitters yesterday, said he feels good, and will be ready to go next week. Prior has been on the Disabled List 50.1% of the time since being called up in 2002, and the Cubs can only hope he returns healthy and can pitch successfully. As for Wood, "We're just giving him a little more time," Piniella said. Michael Barrett expressed his desire to remain with the Cubs and is willing to discuss a deal whenever the Cubs want. "I will put no deadline or nothing on anything," Barrett said. "For me, 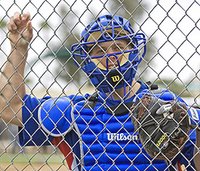 I feel like I've been through a lot as a player, and I feel completely blessed to be a part of this team. For me, if there's a distraction that keeps you from appreciating putting on a Cubs uniform, then something ain't right. That's the way I feel." Barrett, who hit .306 with 16 HR, and 53 RBI, was on the verge of hitting the minors after batting .208 with 10 HR and 30 RBI. "Now that I've had the opportunity, I feel indebted to this organization for what it's done. It believed in me at a time when a lot of teams and a lot of people gave up on me...When you have that grace extended to you, it's easy to come to the yard and be appreciative."