Share All sharing options for: Williams Passing on Yankees Offer 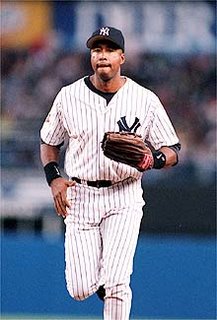 Free agent outfielder Bernie Williams is passing on the Yankees minor league offer with an invitation to spring training. Williams, who hit .281 AVG, 12 HR, and 61 RBI, said he'd rather wait for a guaranteed offer than play his way onto a roster. "We love and respect Bernie, but with the dynamic of our roster, there's not a spot," GM Brian Cashman said. "We had a lot of conversations with him. I understand that he doesn't want to accept a minor league deal." Teams that could possible use Williams' services are the Cubs, Royals, Marlins, and Nationals. The Nationals are trying Kory Castro in left field and possibly platooning him with Williams would ease him into the majors. The Royals are in the same situation with Reggie Sanders: Sanders slumped considerably last year and could possible be released or benched. If the Royals make a run for Williams, he could get an everyday job in right. For the Marlins, although it is unlikely, could platoon Williams with Alfredo Amezaga, who hit .260 with 3 HR. The least likely is the Cubs, who would possibly only need Williams if they decide to trade Jacque Jones. If this highly unlikely scenario happens, Williams would be a one year stop gap in center with Felix Pie taking over in '08, Soriano in right, and Matt Murton in left. He might not get another job unless someone gets hurt, or next off season when he decides to take a minor league offer. Bernie Williams has a career average of .297 with 287 HR and 1257 RBI in 16 seasons with the Yankees.