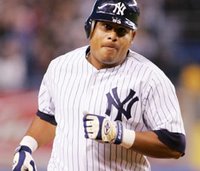 The Yankees announced Bobby Abreu will be out for two to three weeks with a strained oblique. The injury happened during batting practice at Legends Field. "It's just one of those things," Torre said. "I guess the good news is that it's early and you can afford a couple of weeks right now." Torre shot down any ideas that Bernie Williams will be back with the team. Abreu was .297 with 15 HR and 107 RBI with the Phillies and Yankees last season. Johnny Damon also returned to Yankees camp after missing two days for personal reasons.