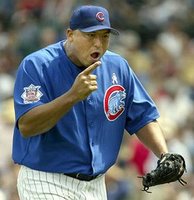 Carlos Zambrano addressed Cubs nation yesterday and said that if the Cubs do not sign him, he is gone. "Whatever happens, I don't want to know about a contract during the season. I want to sign with the Cubs before the season starts. If they don't sign me, sorry, but I must go. That's what Carlos Zambrano thinks." Zambrano, who was 16-7 with a 3.41 ERA and 210 strikeouts last season, asked for $15.5 million in arbitration. The Cubs countered with $11.025 million. He expects the Cubs to offer a similar deal to the one Barry Zito received, and wants it all to be finalized before Opening Day. If Zambrano doesn't sign with the Cubs, expect the Yankees, Mets, Phillies, and even the Angels going after him. However, with the way the Cubs have been spending, there is little doubt in my mind that he will not get a contract with the Cubs. I see the Cubs offering a deal between 17-19 million dollars for seven years.

<!-- START THE POLL: If the Cubs are unable to sign Carlos Zambrano, what should they do? -->

function results(pollURL) {
resultsWindow = window.open(pollURL,"results","menubar=no,status=no,scrollbars=yes,resizable=no,width=600,height=400");
}
If the Cubs are unable to sign Carlos Zambrano, what should they do?


Trade him, get something for him while they still can

Keep him, try and work it out in the off season

<!-- END THE POLL: If the Cubs are unable to sign Carlos Zambrano, what should they do? -->