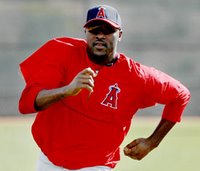 According to one major league source, the Angels are considering voiding Gary Matthews' contract if he doesn't come clean about the allegations against him that he took Human Growth Hormones. The Angels are frustrated by the amount of coverage this is getting even though there is hardly any information; still, the Angels are expected to take action. "We want as much information as Gary can provide, but he can't or won't tell us anything," Mead said. "There is a sense of frustration here because of the lack of information. Everyone understands this is a legal issue but there is a sense of frustration. We feel like this is hanging over our heads." The Angels and MLB don't think Matthews has a legitimate reason to stay silent."There's no reason for him not to say something," the source said. "If he had a prescription (for HGH) and he took it before it was banned (2005), then he doesn't have to worry about anyone punishing him." It is possible the Angels will void his contract and rework a similar contract with an opt clause if he is indited, similar to the clause the Giants gave Barry Bonds.