Benitez to Beantown? Lieber to Chicago?

Share All sharing options for: Benitez to Beantown? Lieber to Chicago? 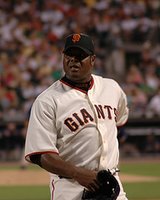 After Armando Benitez pitched a scoreless inning on Sunday for the Giants, teams have started to inquire about his services. The Marlins have been interested, but talks will only continue if the Giants pay for most of his contract. Now, the Red Sox, who have an extremely weak bullpen, are interested. And the only way to keep their interest up is to keep playing him. Scouts clocked Benitez in the high 80s and low 90s; however, one scout noticed his lower half didn't seem totally right during his delivery. Benitez says he expects to be ready for Opening Day, wherever he is. "I've heard the rumors," Benitez said. "That's all right. I can't think about that. I just have to get myself ready. I know what I can do. When I'm healthy, there aren't too many people who can do what I do." Benitez, who went 4-2 with a 3.52 ERA and 17 SV, was often booed at AT&T Park and the Giants would probably have to either cover most of the salary to receive anything for him, or take a minor leaguer or two and allow the Red Sox to absorb the salary. Meanwhile, Jon Lieber appears to be the odd man out in the bullpen, with Garcia, Eaton, Moyer, Myers, and Hamels filling the spots. It would make sense for the Phillies to trade him not only to dump the 7.5 million he is owed, but because he is 36, and had his first

losing record since 2002, which could show signs of aging. His velocity has slowed down as well, but he is throwing strikes and getting ground balls. The White Sox, who has recently inquired about Aaron Rowand, would try to snag Jon Lieber in the trade. Not only are the Phillies looking to trade both, but the White Sox appear more than willing to absorb the cash and offer a package of players, major and minor leaguers to acquire both. They have a very weak outfield with Brian Anderson in center, Podsednik in left, and Dye in right and it would make sense to replace Anderson with Rowand, and push Floyd to the 'pen to make room for the veteran Lieber. Phil Rogers suggests that the White Sox trade Mike MacDougal, Rob Mackowiak, and Josh Fields, along with another prospect for the pair of Phillies. Other teams that are interested in Lieber are the Cardinals, Astros, and Giants.