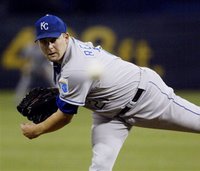 The Braves announced today that they have signed pitcher Mark Redman to a minor league contract and announced that he will start Saturday's game against the Blue Jays. "It's a great pick-up," Braves manager Bobby Cox said. "We're thin." Redman, who went 11-10 with a 5.71 ERA for the Royals last year, was selected to the All Star Game in Pittsburgh. However, he was asking for too much during the off season and no one was interested. "I think we got lucky that there was a guy around like that," Cox said. "You know that every team is looking for starting pitching. There's going to be one or two guys not make the rotation somewhere that's going to be available." Redman will make $750,000 if he's placed on the 40-man roster. Redman's contract also allows him to make an additional $500,000 in performance bonuses, based on the amount of starts he makes at the Major League level.