Clemens Won't Return Until May

Share All sharing options for: Clemens Won't Return Until May 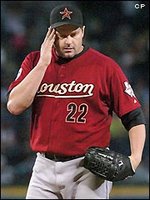 Roger Clemens told ESPN.com that if he does decide to pitch, he will decide between the Red Sox, Yankees, or Astros. "From what I understand, all three teams want to see where they are as far as their rotation ... and how their pitching lines up," Clemens told the Web site. "Not a one of them wanted an April or May [deal] anyways. All three teams look good as far as their pitching staffs go. My agents will let me

know if and when they call." Don't think the Astros have the best chance of signing Clemens either. Clemens says that he would sign a similiar deal to what Pettitte got with the Yankees even if Pettitte decided to stay in Houston. Clemens has pitched in Astros and Yankees camp as of late, but it is uncertain whether he has made an appearance at Red Sox camp. If he decides to come back, he will probably be looking at a