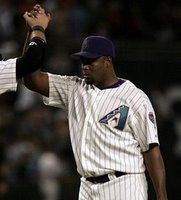 The Marlins finally got the closer they were looking for. Yesterday, the Diamondbacks traded closer Jorge Julio and cash to the Marlins for Yusmeiro Petit. Armando Petit who was apart of the 2005 deal involving Carlos Delgado pitched in 15 games last year with a 9.57 ERA. The Marlins beat out the Cardinals and Pirates for Julio, but were still stuck with their second choice. They eagerly pursued Armando Benitez but after Giants GM Brian Sabean told them he's not for sale, they settled for Julio. Julio will take over the closer role after the Marlins lost Joe Borowski this past off season. The Dodgers traded Elmer Dessens to the Brewers for cash and Brady Clark. Clark will probably man the role in the outfield after Jason Repko will probably have season ending surgery. Clark had a bad year last year, a year after hitting .306 with the Brewers. He holds a .278 career average. Dessens will give the Brewers even more depth this year and will give the Brew Crew a veteran in the clubhouse. "Elmer brings 10 years of major league experience to our pitching staff," Brewers general manager Doug Melvin said. "His versatility as a spot starter and long reliever should allow him to play a valuable role on our pitching staff this season."