Share All sharing options for: The Devil Rays Future

For players like Carlos Zambrano and Andruw Jones, its great to see players like Barry Zito or Vernon Wells getting eighteen million dollars a year for a seven years. However, for a team like the Devil Rays, it makes it almost impossible to snag a player that is one of the best in baseball, and still improving. They must focus on acquiring cheap veteran players that might have one good year left, trading for prospects in hope they turn into something great, or establishing their top prospects into ball players. Last year, they brought in veteran Ty Wigginton who turned out a good year for the Devil Rays, but was unable to lead the team out of last place for the second straight year. They posted the highest bid for third basemen Akinori Iwamura and they hope his numbers from Japan can carry over like they did for Hideki Matsui or Ichiro. They groomed Rocco Baldelli and Carl Crawford into potenial All-Stars but still lack good pitching which might be the only thing holding this team back. With Delmon Young taking over the reigns in right field and Elijah Dukes waiting in the wings, it is possible Rocco Baldelli or Carl Crawford might 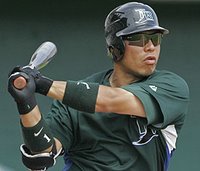 be on their way out to acquire pitching. It would also avoid going through a lanky negotiation process leading to a long term deal for a preposterous amount of money. They brought in Scott Kazmir a couple years back in hopes that he would turn into a great pitcher. Yes he has had back to back double digit wins (10), but when you are backing a rotation, you would hope that would turn into something more. But he is still young so there is still a lot of hope he can turn into something. They are doing the same thing with once Cubs prospect Jae Kuk Ryu, who is starting today. It is possible I am over exaggerating their possibility of becoming a contender in the AL East; however, it is possible that within a few years, that they could give teams like the Yankees or Red Sox a challenge to add wins to the win column.