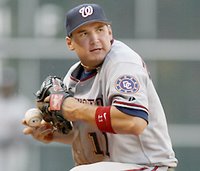 The Nationals announced today that they have renewed Ryan Zimmerman's contract for the 2007 season. Zimmerman, who batted .287 with 20 HR and 110 RBI, finished second in the voting for Rookie of the Year behind Hanley Ramirez and will make 400,000 next season. However, he is not eligible for free agency until after the 2011 season. Jim Bowden said he hopes to continue contract discussions with the third basemen to keep him with the organization for years to come. "The kid is happy, and he knows he's going to be the face of the franchise for years to come," Nationals manager Manny Acta said.