Prior Out With 'Loose Shoulder'?

Share All sharing options for: Prior Out With 'Loose Shoulder'? 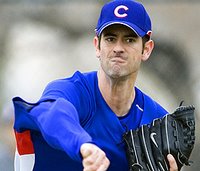 According to Yahoo! Sports, Mark Prior may be forced either to the disabled list or to Triple-A to rehabilitate his shoulder. After this "rehabilitating" happens, he will then work on strengthening his shoulder in the extended minor league camp or on assignment in the minor leagues. Scouts say that the reason his chronic injuries keep reappearing is because when he was younger and as of today he is not finishing his motion, and his fastball "lacks pop and his breaking ball is not trustworthy." Friday morning around 8:30 the Cubs had him throw again and he pitched four scoreless innings. However, his fastball topped off at 89, and it was erratic. So there is still hope that he can return by May, strong, but not the same. But, the Cubs plan to keep him in the extended spring training camp for at least the first week or two of the season. In five years with the Cubs, he is 42-29 with a 3.51 ERA and 757 K. However, he has only pitched in 106 games over that span, missing most of last year, and has been faced with some rather "freakish" injuries in 2005 and 2004 forcing him out. In 2004, he flipped over Marcus Giles running to second base and in 2005 was hit in the elbow on ball hit back to the mound against the Rockies.