Share All sharing options for: Rogers, Gagne, Furcal Oh My! 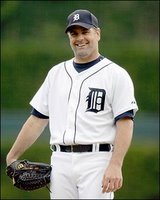 The first of many injuries in baseball have been announced today with Kenny Rogers and Eric Gagne already heading to the DL. Fortunately, it is nothing serious. The Tigers are calling Rogers' injury nothing but a tired arm while Eric Gagne is being put on it for more time. Meanwhile, Dodgers manager Grady Little plans to place Rafael Furcal on the DL because of his weak ankle, but is expected to return sometime in April. Other notable players hurt are: Chone Figgins, Jered Weaver, Bartolo Colon, Bradon Backe, Jason Repko (season), Cliff Lee, Josh Johnson, Nick Johnson, Kris Benson (season), Freddy Sanchez, Chris Denorfia (season), and Chien-Ming Wang. For a complete list of injured players, check out rotoworld's injury list.

UPDATE: KENNY ROGERS IS OUT FOR THREE MONTHS WITH A BLOOD CLOT IN HIS SHOULDER.