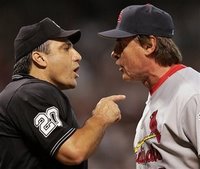 Cardinals manager Tony La Russa blew a .093 yesterday evening when cops approached his stopped vehicle in an intersection despite a green light. La Russa was supposedly asleep with the car in drive and his foot on the brake. Although released, La Russa, 62, was charged with a misdemeanor. The release states that La Russa was cooperative during his arrest, but the Cardinals are still disappointed with what has happened. "The Cardinals apologize for any embarrassment and/or distraction this reported occurrence has created towards the team and its loyal fans," the club said in its statement. La Russa will probably be forced by the team or under probation to go to some sort of A.A. meeting; However, he will not be forced out of managing any games.