Share All sharing options for: Cardinals Haunted By Dispatch Article 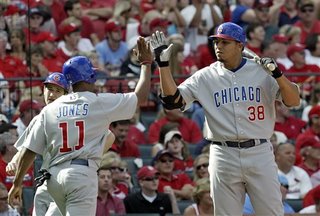 The St. Louis Post Dispatch had an article on the cover of their newspaper earlier this week discussing, more like poking fun at the Cubs and how they haven't been to a World Series in nearly a century. It even went to say that after spending 300 million dollars, the Cubs are still chasing the Cardinals. Later that day, the Cardinals were beat by former Cardinal Jason Marquis and the Cubs 5-3, and after the game, manager Tony LaRussa expressed his apologies to the Cubs, and said he had nothing to do with it. He also refused to answer any questions from Dispatch reporters. And today, Carlos Zambrano, Jacque Jones, and company went on to beat the Cardinals 8-1. Zambrano pitched seven innings, giving up one earned run, and struck out two. Jacque Jones was a homerun away from the cycle, going 3-4 with 4 RBI. On the Cardinals side, Adam Wainwright struggled, going 4.1 innings giving up six earned runs. The Cubs improve to 10-13 and push the Cardinals to 10-13. The Cubs go for the sweep tomorrow on ESPN at 6:55 p.m. CT, Rich Hill for the Cubs and Kip Wells for the Cardinals.