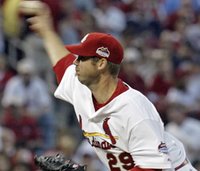 Cardinals ace and 2006 Cy Young winner Chris Carpenter will miss his next start for what the Cardinals are calling, "right elbow inflammation." Although Carpenter is not on the disabled list, it is uncertain if he will be ready for his next start after a full week off. "Obviously, anytime something's going on, it's one, frustration, and two, disappointment," Carpenter said. "Three, I don't know if it's alarming or not. I want to make sure it's OK. With that said, everybody I've talked to -- doctors, trainers -- are not alarmed. They don't think it's anything serious." If Carpenter was to miss a month at most, it would seriously affect the Cardinals because their pitching is already weak, and losing him would put them behind the new and improved Brewers, Cubs, and Astros! Assuming it is not to serious Cardinals fans, he will just miss one start and return to pitching but worst case scenario, this could turn out to affect the Cardinals 2007 season.