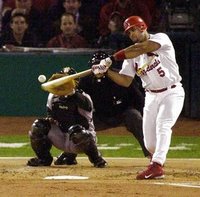 In back to back games, the Cubs have gone to extra innings, and have been hurt by the teams top hitter. In yesterday's finale against the Cardinals, Ryan Dempster came in started off okay, but threw a belt high fastball to Albert Pujols that was taken nearly out of the park. That lost the game and the series for the Cubs. Tonight, the Cubs take the game into extras and fail to end it early, forcing the Cubs to go to new callup and rookie pitcher 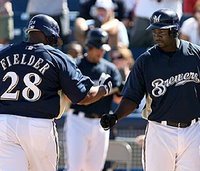 Rocky Cherry. Cherry is able to start off strong, but then throws a slider of the over the plate to Prince Fielder that just gets out, with the wind blowing in. The Cubs are hoping to add a twelfth pitcher to their staff, and whether they send down Ronny Cedeno, or Felix Pie, has yet to be determined. They will most likely callup Angel Guzman to be the fifth starter while Miller is on the DL. The Cubs drop to 7-12, well into last place, but the good news coming out of the game is Alfonso Soriano is starting to heat up, and so is Felix Pie. The Cubs have been struggling as of late and you can expect a change within the next couple of days. Whether it is Felix Pie or Ronny Cedeno being sent down, something will happen. The pitchers are tired, and they are now relying on Rich Hill to go deep into the game tomorrow to avoid Piniella reaching into the pen. The Cubs have a day off this week, so hopefully they can get some much need rest.