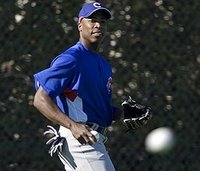 Cubs center fielder Alfonso Soriano slid awkwardly trying to make a play in the outfield tonight and apparently has a strained hamstring. Tests will be run tomorrow, but as of today, he is day to day. Before leaving however, Soriano collected a hit, and scored a run. The Cubs ultimately won the game 12-4. Aramis Ramirez is cleared to play tomorrow and you can probably guess that he will be used as a pinch hitter, with Theriot at third, DeRosa at second, and Jones in center. With Murton and Jones taking the corners. They play Greg Maddux and the Padres in the finale at 1:20 p.m. before heading to Atlanta.