Cubs, Zambrano Close in on Deal

Share All sharing options for: Cubs, Zambrano Close in on Deal 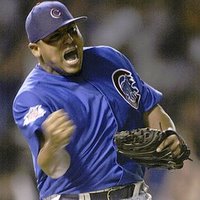 The Cubs are closing in on a five year contract, worth at least 85 million dollars with ace Carlos Zambrano. Zambrano has decided to waive his deadline to finish the deal by Opening Day that his agent says is in the final stages. "Our discussions have progressed to the point where we're going to extend the deadline for an indefinite period of time," Praver told FOXSports.com on Sunday. Zambrano, 64-42 lifetime with a 3.29 ERA, is a two-time All-Star. He has pitched 209 or more innings in each of the past four seasons. Agent Barry Praver and GM Jim Hendry are working out the final incentives, including opt clauses and a potential no trade clause.