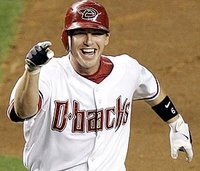 After pitching seven shutout innings, Padres ace Jake Peavy handed the game over to arguably the best eighth and nine inning pitchers, Scott Linebrink and Trevor Hoffman. With help earlier in the game from Termel Sledge, and a RBI double from Kevin Kouzmanoff, the game was all but won, especially against the slumping the Diamondbacks. However, Miguel Montero battled back on Linebrink and hit a homerun, and in the bottom of the ninth, former top prospect Stephen Drew belts a walkoff homerun off the all time saves leader, Trevor Hoffman. The Diamondbacks ended a five game slide, improving to 11-11. The Diamondbacks and Livan Hernandez take on Chris Young and the Padres in the series finale Fox Sports Net at 6:40 MST.