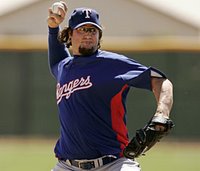 Eric Gagne left Sunday's game in the ninth inning with an injury to his right knee. Gagne, who was attempting to close out the game against the Oakland A's. He landed awkwardly after throwing a pitch to Mark Ellis. He eventually limped off the field after being reviewed by Ron Washington and the Rangers trainer. With Gagne out, expect Otsuka to take over as the full time closer again and for the Rangers to give Gagne as much time as he needs to get healthy. Gagne, who has collected 10 saves in the past three years, has pitched in 3.1 innings and has given up no runs, but has walked two, and struck out one. Gagne, 32, will be a free agent after this season and if he is faced with more injuries, will probably be looking for another one year, incentive based deal.