Hampton Out; Carpenter to DL

Share All sharing options for: Hampton Out; Carpenter to DL 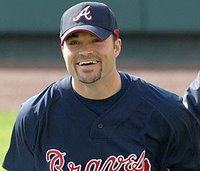 Braves pitcher Mike Hampton will have surgery on his left shoulder Tuesday, being shutdown for the second straight season. Hampton, who had elbow ligament-replacement surgery in 2005, will have a torn tendon in the elbow repaired on Tuesday. "I guess the only silver lining is my elbow will get a little more time to rest," Hampton said in spring training. With Hampton out, it is likely that Redmond and Davies will take the final two sports. The Cardinals announced today that Cardinals ace Chris Carpenter will be placed on the 15 day DL after an MRI exam revealed arthritis and a previously undiscovered impingement in his right elbow. With Carpenter on the DL, the Cardinals called up 30-year old Randy Keisler, who pitched in 11 games last season in Oakland. The Cardinals say its not 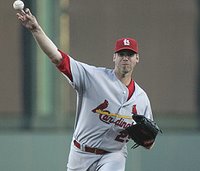 serious and they will have him back soon, but if it turns out to be ligament problems, he could be out for the season. One week into the season, former closer Brad Lidge is out of the job again. Dan Wheeler will take over as the new closer and Lidge will move back to the bullpen. "I wrestled with this all of yesterday," manager Phil Garner said. "I feel that I have to make this move for the benefit of the team. In the situation that we are in right now, we can't afford to lose any more ballgames late." Lidge was 1-5 with a 5.28 ERA and 32 saves in 38 chances last year.


FANTASY SUGGESTION FOR CARPENTER: SOMETHING IS WRONG, IF YOUR TEAM IS ALREADY WEAK, TRY AND TRADE HIM BECAUSE HE WON'T BE THE SAME THIS YEAR, IF HE COMES BACK.

FANTASY SUGGESTION FOR LIDGE: NO MORE SAVES, DROP HIM.