Share All sharing options for: Hernandez To Miss 3 Starts 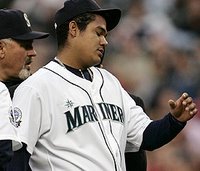 The Mariners announced today that Felix Hernandez will miss up to three starts with a muscle strain inside is throwing elbow and forearm. According to his doctor, he will not throw for five days, and then can start playing catch. "I think 10 to 20 days is a reasonable estimate," [Edward] Khalfayan said when asked when Hernandez might again pitch in a game. "That's as good a news as you can get from an elbow injury." Hernandez has dominated opponents as of late, one hitting the Red Sox, and striking out a total 18 batters in three games. He is 2-1 with a 1.56 ERA. Hernadez, 21, although injured, remains in good spirits and plans to travel with the team on the road.