Igawa Does Well, Karstens Out

Share All sharing options for: Igawa Does Well, Karstens Out 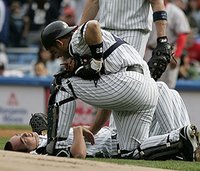 Over at MLB Rumors: Japan's Fab Four, I discuss Kei Igawa's outing and how it will effect the Yankees. Also, Jeff Karstens season ended as fast as it started: He started the season on the DL, got in one below average outing, and after one pitch today, he's back on it. He is expected to be out at least a month, possibly two. Anyways, as a MLB Rumors Insider, the site indicates that the Yankees will discuss which minor leaguer to call up, and if they should move Igawa back to the rotation after his solid outing. Check it out...