Share All sharing options for: Indians Lock Up Westbrook 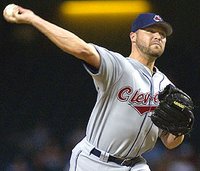 The Indians sign Jake Westbrook to a three year extension, worth 33 million dollars. Westbrook, who was the subject of trades with the Cubs this off season, was hoping to get a deal done during Spring Training, but is perfectly happy with his new deal. The deal holds no options, so the Indians will have Westbrook, one of the most consistent pitchers in the AL, til the 2010 off season. He says that contract talks really weighed him down so far this season, as it shows, he is 0-1 in one in two starts with a 7.36 ERA. "It comes down to how comfortable I am here," he said. "Not only for myself, but my family. We have an 18-month-old son [Parker] growing up. We felt very comfortable here, and [the Indians] made a huge effort to get the number I wanted." The past three years, Westbrook has had fourteen or more wins and an ERA under 4.50.