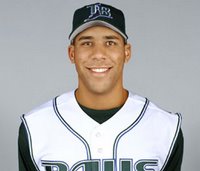 Vanderbilt pitcher and pitching prospect David Price was nice enough to sit down and answer some questions for MLB Rumors through email. This season, the Vanderbilt Commodores are 39-8, 15-6 SEC. Jim Callis over at Baseball America believes that the consensus around baseball is that Price is the best prospect coming into the draft, but knows the draft has a lot of depth. The Devil Rays have usually gone towards hitting, but Price is too hard to pass up. He has been clocked at hitting 98 on the radar gun, with a slider topping at 88. Not only that, but he has outstanding control. I would like to thank him again for donating his time to answer these questions.

ELI: What is it like pitching in Tennessee, where you grew up?

DAVID: Pitching in Tennessee where I grew up is awesome. That's why I went to Vandy so people that watched me grow up and play baseball would still be able to do that.

ELI: Do you notice scouts during games? Does it bother you?


DAVID: No that's more of something you notice when you are in high school. Now you tune that stuff out and you never even see them. So no it does not bother me.

ELI: Now that the draft is a month away, are you looking forward to potentially going pro?


DAVID: Right now, no. My mind is completely set on Vanderbilt Baseball and until our season is over it will not be on professional baseball.


DAVID: Yes my favorite team was the Braves. I guess because they are good and were the closest team to me.

ELI: If you weren't a pitcher, what position would you be?


DAVID: Somewhere in the outfield.

ELI: Were you always a pitcher, when did you start playing?


DAVID: I started playing when I was 2 and a half. I would play by myself in the back yard. I guess I started pitching around the age of 10 or 11.

ELI: Do you have a favorite player now?

ELI: How's Tim Corbin? Do you think he has molded you into the player you are over the past three years?


DAVID: Yes definitely. He is the man. He just has that something special about him that makes you want to give 110% percent every practice and every game.

ELI: You wear number 14? Is that number significant?


DAVID: No, that is just the number they gave me.

ELI: How do upperclassmen treat the younger guys? Do they embrace them and help them? Or do they help them but keep to themselves?

ELI: What is the chemistry like in the clubhouse?


DAVID: Unreal. This is the best team I have ever played on. Everyone in there has one common goal and that is to win Omaha.

ELI: Is there anywhere you hope to go before the draft?