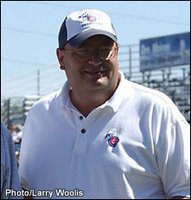 Iowa Cubs President and General Manager Sam Bernabe was kind enough to answer some questions of mine for MLB Rumors. The Iowa Cubs (2-3) are the Triple A affiliate for the Chicago Cubs. They are currently housing top prospects Felix Pie, Eric Patterson, J.R. Mathes, and Carlos Marmol, among others.

ELI: First, what were the steps to hiring/promoting Buddy Bailey? Who else was up for consideration?

SAM: As a minor league affiliate we don’t do any of the hiring of the field staff. The Cubs minor league department makes all of those decisions.

ELI: As far as you know, who is the leader in the clubhouse?

SAM: The team has yet to come to Des Moines to play. We open on Friday night so I haven’t had a chance to observe or be around the clubhouse with the players around as of yet. I suspect with the number of prospects returning to the team this year from last years team there will be plenty of leadership form veteran prospects.

ELI: What are you day to day routines as GM?

SAM: I’m in charge of the entertainment machine that has 72 days of activities. I have a full time staff of 26 and part time of around 300. I’m responsible for making sure the Chicago Cubs have all they need to train their players. I’m the liaison to the ball club for the City of Des Moines, the Chicago Cubs, the Pacific Coast League, Minor League Baseball and Major League Baseball.

ELI: Any new additions to the team this year? Where do you expect to finish this year?

SAM: There are no significant changes to the team this year at this point. A small number of signed 6 year free agents fill out a roster that has a large number of returning prospects. We finished tied for first last year. I would expect us to be just as competitive this season.

ELI: Do you communicate with Cubs GM Jim Hendry often?

SAM: Not too often. Jim comes to town usually twice a year. I will see him in Chicago usually 3 or 4 times a year. Our phone conversations are limited.

ELI: What other jobs have you held in baseball that got you to this spot?

SAM: I started with the Iowa Cubs as an intern in Dec. 1983. I worked my way up to G.M. by the fall of 1986. I know own part of the team and I’m President of the ballclub. I’ve never worked for any other operation.

ELI: Did you play baseball as a kid? what position?

SAM: I played from the time I was 10 until my sophomore year in college. I was a pitcher.