Share All sharing options for: Johnson Successful in Triple-A Outing 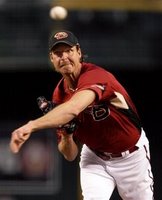 New Diamondback Randy Johnson had a successful minor league outing for the Tucson Sidewinders throwing sixty pitches over four innings. However, Johnson is still far away from joining the team. Not only will Johnson join Single-A Visalia to pitch next week, but the following week he will be back in Tucson for another game. And if all is well and there are no problems to report, he will then join the Diamondbacks. "We're giving him the normal progression going forward," manager Bob Melvin said before the team's game against Colorado on Tuesday night. "This is his spring training right now. We can't cut that too short." Yet, Melvin still thinks Johnson, 43, can be an elite pitcher. Although Johnson won't even be the number two pitcher, he is still expected to balance out the rotation and guide the young players throughout the season.

FANTASY SUGGESTION: IF HE IS STILL A FREE AGENT IN YOUR LEAGUE, PICK HIM UP NOW! RANDY JOHNSON IS BACK IN ARIZONA AND HAS A SOLID TEAM BEHIND HIM. I EXPECT HIM TO PICK UP ATLEAST 14 WINS AND BE ABLE TO LOWER HIS ERA FROM LAST YEAR. HE STILL HAS SOMETHING LEFT, AND HE WOULD BE A HUGE SLEEPER IF YOU COULD GET HIM.