Lilly Lights Out in Cubs Debut

Share All sharing options for: Lilly Lights Out in Cubs Debut 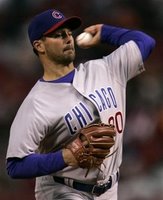 In his Cubs debut, Ted Lilly was looking like he was worth 40 million dollars. Lilly pitched seven innings, giving up three hits, one earned run, and struck out nine. Not only that, he picked up his first career RBI. Lilly, who came over from Toronto during the off season, is 60-58 in his career. Also helping Lilly, new Cub Mark DeRosa made an amazing defensive play and hit a two-run single in the eighth to give the Cubs a 4-1 lead. Lilly surrendered one walk to Griffey Jr.

FANTASY SUGGESTION: IF HE IS STILL A FREE AGENT, WATCH HOW HE DOES IN HIS NEXT FEW STARTS BECAUSE HE IS SOMEONE THAT YOU COULD NEED TO GET A COUPLE EXTRA POINTS TO BEAT AN OPPENENT LATE IN THE WEEK. HE EATS UP A LOT OF INNINGS AND IS ALMOST GURANTEED TO RACK UP STRIKEOUTS.