Share All sharing options for: Mariners Lock Up Lopez 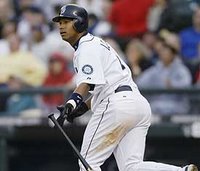 The Mariners agreed to a four year extension, worth 13.75 million dollars with second basemen Jose Lopez. Lopez was selected to the All Star game last year, hitting .282 with 10 HR and 79 RBI. This comes weeks after signing shortstop Yuniesky Betancourt to the same contract, meaning they will control the middle infield for the next several years to come. "We project Jose to develop into a really special middle infielder," Bavasi said. "He appeared in the All-Star game in his first full season, and is still improving both offensively and defensively.