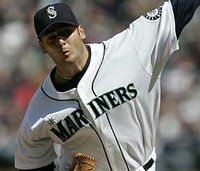 Ichiro, Beltre, and Vidro combined for four homeruns and were 9-14 with 10 RBI's, and 9 runs scored to win by a score of 14-6.It was McCarthy's shortest outing of his young career, giving up six runs over two innings. "It wasn't one of the more positive outings I'll have this year," McCarthy said. Horacio Ramirez was strong for the Mariners in six innings, giving up just one earned run and picking up his first win. "Well, at least the weather was better," said Ramirez after going six innings and allowing seven hits and five runs (just one earned). "I think I did a good job of staying sharp." Mariners will take on Ramon Ortiz, who is 2-0 on the year, of the Twins, while the Rangers look to bounce back against the White Sox.