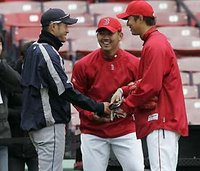 The Red Sox/Mariners game tomorrow is shaping up to be the best game of the year (so far). Not only will Daisuke Matsuzaka be making his Fenway Park debut, but it will be against Ichiro and the Mariners, with Felix Hernandez on the hill. Matsuzaka is already looking forward to pitching to him, and you bet Ichiro is looking forward to the same. "Ever since he left Japan to go to the Majors," Matsuzaka said, "he is someone I've wanted to face again. However, Suzuki has only hit a weak .235 (8-for-34) against Dice-K in their two mutual seasons in Japan. Matsuzaka, who dominated the Royals in his debut is expected to dominate most of his opponents for the first time because they do not know his tendencies. Here is one take on it from Red Sox 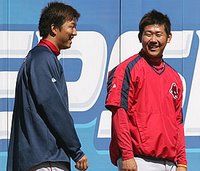 correspondent for MLB Rumors Dale Nakashjima: "Matsuzaka has suprised me and many others with his command and poise on the mound. He will face a lot of new teams for the first time and he'll just be told to go out and pitch. The Red Sox defense, with minor wholes, is still pretty darn good and with eight known pitches that he is comfortable throwing at anytime, he will be tough to beat. He could come into July with a 10-0, 10-1 record because no one could figure him out, then he could coast the rest of the season into a 17-5, 18-6 record. He will keep his ERA low, that is for sure, the park that he will pitch in [Fenway] works well with his pitches and will work for him, surprisingly." Hernandez has also dominated as of late, and will probably continue to all year. It will be determined tomorrow who came to hit when the first pitch is thrown at 7:05 ET. Personally, knowing Matsuzaka's history as a pitcher, he always wants to finish a game and if Hernandez brought his stuff, it is almost guaranteed that Matsuzaka will go as far as he can to get the win. My prediction is for Red Sox over Mariners.

Dale Nakashjima: "Although Daisuke Matsuzaka will want to impress his Red Sox fans and he might give up a run or two early, I see him finishing this one out and getting the W."