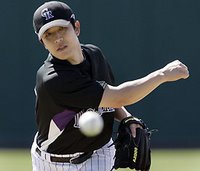 The Rockies are still looking to trade Byung-Hyun Kim, but have found no takers. They are in talks with the Brewers over Jose Capellan, but nothing serious as of late. Kim will get paid 2.5 million dollars this season, a decision Dan O'Dowd is still regretting. According to sources, O'Dowd has called around but teams that are interested arn't offering anything that will help the Rockies. Kim, who has always struggled as a started, was very displeased about being sent to the bullpen. Kim would probably be happy for a trade it is just whether Dowd is willing to accept hardly anything for him. Unless he were to package a player with Kim for Capellan or another reliever elsewhere. But the way things are shaping up now, Kim will be lucky to be in a Rockies uniform in June.