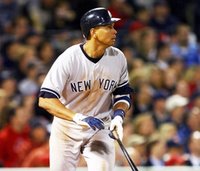 Although I love seeing Alex Rodriguez having a great year, it has become very annoying hearing every couple of weeks: I'm Staying. "I want to stay in New York, no matter what," said Rodriguez, who can become a free agent following this season and leave $81 million on the table. However, back on March 14th, we heard the same thing from Rodriguez, just in a different place and under different context: "I would love to finish my career here." And back in October, Brian Cashman told reporters that "He wants to stay here..." So, have we had enough yet? Alex Rodriguez is staying in New York, and nothing has changed on the situation, at all. The Yankees organization wants him and it is obvious A-Rod feels the same way. Despite this controversy that frustrates many, Rodriguez is off to a great year, and has belted fourteen homeruns this season. Bonds hopes he can hit one hundred, however playing in New York, you're bound to slump at least once.