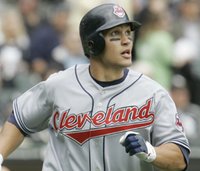 The anticipation this year to see what Grady Sizemore could do is already drawing MVP buzz. Although it has only been two games, Sizemore is hitting .400 with 2 HR and 3 RBI. His first homerun came off the second pitch from Jose Contreras in the first inning and his second homerun gave the Indians the lead. Yes, Sizemore is a leadoff hitter but not only has he helped with his hitting in years past, but he is an incredible fielder which has held that outfield together since he has been with the Indians. Along with that, his leadership on the field cannot go ignored. Career wise, Sizemore is a .286 career hitter with 56 HR and 184 RBI in just four years with the Indians.

FANTASY SUGGESTION: SIZEMORE IS ALREADY A GREAT PLAYER AND WOULD NOT BE A FREE AGENT IN YOUR LEAGUE. HOWEVER, IF YOU ARE OVER LOADED WITH PITCHERS AND ARE LOOKING FOR A GREAT PLAYER, HE IS DEFINITELY A PLAYER TO CONSIDER. GREAT POWER, AND WILL NOT ONLY SCORE RUNS, BUT WILL PRODUCE THEM TOO.