New Brewers pitcher goes to the mound for the first time not only against his former team, but just a day after he lost a close friend and teammate Josh Hancock. The Cardinals take the field for the first time since losing teammate Josh Hancock in an automobile accident and just couldn't connect against Jeff Suppan. Suppan, who is now 4-2 with a 2.55 ERA, pitched his best performance of the year, and not only that, threw his first complete game since 2003. With help from Prince Fielder, who was 2-4 with a double and homerun, and two RBI performances from Johnny Estrada and Kevin Mench, the Brewers were able to improve to 16-9, dropping the Cardinals to 10-14. Now you may think it is early and the this happens every year, where the Brewers or Reds 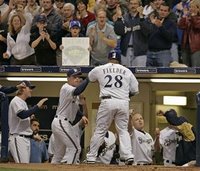 dominate the first month and then their lead quickly diminishes, but you are mistaken. The Brewers revamped their team and have young players who are starting to breakout. While the Cardinals, although having been hit with this terrible loss, are lacking quality pitching. Same with the Astros, who bargained on Woody Williams, who is 0-4 on the year. The Cubs have had great outings from their starters, but their relievers can't seem to hold any leads. But the Brewers have a strong staff, and great hitting, led by Prince Fielder, with help from Geoff Jenkins. Although it is still somewhat early, the Brewers may have sole possession of the lead for the next months to come.