Torre to be Fired?

Share All sharing options for: Torre to be Fired? 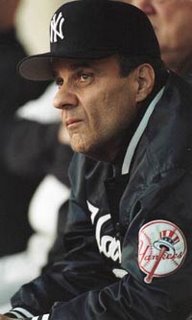 George Steinbrenner is breathing down Joe Torre's back as the Yankees lose yet another game, making that seven straight losses. However, this seems to be "George Being George." Steinbrenner has threatened to fire Torre the past two years after playoff eliminations, but has balked at it. However, yesterday, word from Tampa was Steinbrenner was hinting at a change. Torre is in the last year of his contract, and it is possible, that if they lose again, he could be fired before his contract ends this season. Their are two candidates in the Yankees organization that could replace Torre: Hitting Coach Don Mattingly or Announcer Joe Torre. In past years, the blame has always come down on the managers. For example, Dusty Baker got fired after only winning 66 games. While the pitching coach, hitting coach, were left nameless in all articles discussing the faults. During this seven game skid, the Yankees have been outscored 33-54. Shouldn't the blame fall on the Don Mattingly for that? This season, the Yankees team ERA is 5.12, 27th overall. Should the blame fall on Ron Guidry for that? All I know is the Yankees need someone to blame now and right now, it is Joe Torre. But the chances of the Yankees dropping one of the best managers is sports history is highly unlikely. But if they do fire Torre, it could trigger a ripple effect and the Reds might fire Jerry Narron to try and sign Torre? Or the Mariners firing Mike Hargrove to take their chance at him as well?