Share All sharing options for: White Sox Should Trade Buerhle 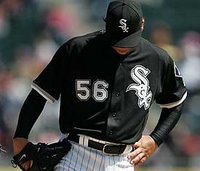 After White Sox pitcher Mark Buehrle threw a no hitter, his price went way up. He is a Missouri native and the Cardinals have already made it known that they are interested in bringing him home. Not only did he grow up a Cardinals fan, but he turned down a three year deal, worth 33 million dollars for the White Sox last year, hinting to the Front Office that he will go after his contract is up. Buehrle, 28, will be a free agent after this season and is expected to get at least "Gil Meche money." He was the face of many trade rumors leaking out of the White Sox front office, but nothing was ever executed. He was discussed in trades all of last season with teams like the Mets, Yankees, Red Sox, Cardinals, and Rangers and there is already a little fued between Kenny Williams and Mark Buehrle, which first started at the Sox Fest in January. And if Mark Buehrle can put together another 16-17 win season, what would stop him from bolting to the market to cash in and leave Chicago where he has been mistreated? The White Sox are in need of an outfielder, and could shop Buehrle around the trade deadline for a big name outfielder. Ichiro could be available?