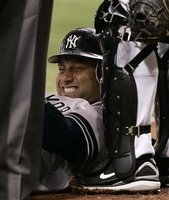 The Yankees lost yet again falling to 8-11. But that is not all, not only did Wang struggle in his debut, giving up four earned runs in six innings, but Derek Jeter got hurt and left the game, and Alex Rodriguez was hit less, ending his 23 game hit streak. The Yankees have Any Pettitte going tomorrow against the Blue Jays, hoping to avoid back to back to back series sweeps. Hopefully they can turn it around at home, hosting five games before going to Texas, two with the Blue Jays, and two with the Red Sox. The Yankees have a day off next Monday, but then go two weeks until their next one. The Yankees hope come Thursday that rookie phenom Phil Hughes can come through in his major league debut and live up to his potential as the veteran pitchers of the Yankees heal up and can come back.