Share All sharing options for: B.J. Ryan Shutdown For Season 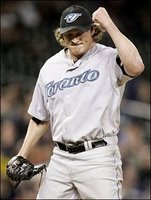 Blue Jays closer B.J. Ryan underwent Tommy John surgery today, ending his season. Dr. James Andrews, who handles most athletes, said Ryan wouldn't need surgery. But another examination said he did, and the surgery, performed by Dr. Timothy Kremchek was successful. Although the Blue Jays expect Ryan to be back for the season, setbacks are expected. Ryan struggled this season, he was 0-2 with a 12.46 ERA and 3 SV. What does this mean for the Blue Jays? It means that Jason Frasor will be taken over as the full time closer probably for the rest of this season and into 2008. He has collected 2 SV this season as the Blue Jays are still in last place.