Brewers Good, Will Get Better

Share All sharing options for: Brewers Good, Will Get Better 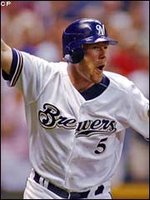 With great performances from Geoff Jenkins and Kevin Mench, you have to think that the Brewers would consider a trade and replace them with either Cory Hart or Gabe Gross. They could improve an already solid bullpen, or maybe add some more depth to the bench. They could even collect a prospect or two. Both Jenkins and Mench are getting older, and a struggling team like the Nationals could use a veteran outfielder to anchor or mentor a young, struggling team. Although they are playing well now, that can't last all season, and they should look to trade while their services are desired. Jenkins is batting .346 with 5 HR and 13 RBI while Mench is batting .319 with 2 HR and 12 RBI. Hart's potential is through the roof, and scouts are saying he could become a power hitting outfielder with above average fielding. So far, pitching is great, and Francisco Cordero has come around to be an excellent closer for the Brewers, for now. Derrick Turnbow will ultimately come the closer, but is doing a great job as a 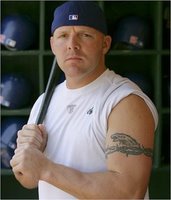 setup man. They are running away in the division like the Cardinals have in recent years, leaving the Pirates, who are in second place, in the dust. This is a huge weekend for the Brewers, who could really pull away playing two teams that struggling (Pirates and Nationals), and they will be at home no less. The Cubs are playing well, and will play the same teams in their next two series, but have their own problems in the rotation. Who's the fifth starter? Angel Guzman who's 12 ERA is hanging high in Iowa? J.R. Mathes, who is showing improvement but no where near ready? All this must be sorted out if they really want to cut the lead of the Brewers.