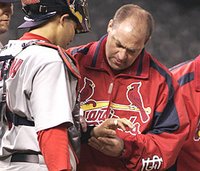 After losing Chris Carpenter earlier in the year and having to send down top pitching prospect Anthony Reyes after failing to get a win after eight losses, they lose starting catcher Yadier Molina for a month and half. Although he is just batting .273 with 1 HR and 12 RBI, he is a pretty good catcher who would definitely benefit that team in a struggling division. Molina was struck by a foul tip in the third inning but tried to stay in. But when Braden Looper saw that he was in pain during a mound visit, he called out the trainer to take a look. Replacing Molina on the roster is catcher Brian Esposito, who has never appeared in a major league game and has struggled in his minor league career batting just .219 in 1,000+ AB. Gary Bennett will probably take most of the playing time, considering Esposito's stats, but Bennett is batting .227 with 0 HR and 2 RBI in 17 games.

Today Broadcast: There will be a broadcast today at 6:30 talking with Yankee expert Mike Fraguela. We will expand our talks to around the league later in the show. Please call in, we would love to here from you. Call 1-646-478-5102 or Click Here to listen live.