Castillo To Be Traded?

Share All sharing options for: Castillo To Be Traded? 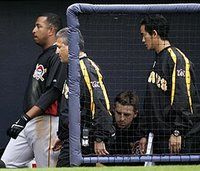 Scott Pucino, Jose Castillo's agent, has asked the Pirates to try to trade his client if he cannot play regularly. Castillo started the past three seasons but became expendable now that Freddy Sanchez has proved he can play everyday. Although GM David Littlefield doesn't talk about individual player matters, he did hint that he may be upset. "With any player, they're very competitive. Everybody wants to play," Littlefield said. "They always strive for that, and I respect that." The Pirates are having him shag fly balls because the only position they have him as a backup is second base. Don Kelly is the backup at shortstop. Littlefield went onto talk about Castillo's value saying "he gives us good depth on the bench," he said. "He provides versatility in the infield, and he's played outfield in the winter. But, with Sanchez and Bautista, those are guys who are doing good jobs at their positions." This season, Castillo is batting .188 with 0 HR and 0 RBI.