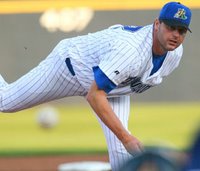 After thoroughly watching Roger Clemens' outing with the Trenton Thunder, I came to the conclusion that he is still at least one start away from making it back to the big leagues. Although he threw 102 pitches, his control was inconsistent, and apparently had a problem with his forearm. Clemens allowed three runs on six hits, walked four, and struck out five in 5 1/3 innings of work. He couldn't get his fastball past the Double-A hitters which means he has no chance of getting it past the Blue Jays, or the Red Sox. I think they should give him one start in Triple-A, and then call him up. Calling him up now would only hurt Yankees, and could hurt Clemens, who is eager to prove he can pitch successfully when needed. It could also force the strained forearm to get worse. If you watch the tape, you will see Clemens quench his fist after each pitch hinting that something is wrong. It would be smart to give him the extra start in Triple-A on the 29th versus Toledo at home, and then call him up for the last game of the series against Boston at Fenway, or for the opener against the White Sox at U.S. Cellular Field the following day. This will give the Yankees an opportunity to address all injury problems and give him one final tuneup before returning to the streaking Yankees.